Refugees’ lives in Italy and their integration in the local labour markets are issues poorly understood and scarcely addressed. The aim of the project Fostering Opportunities of Refugee WORKers (FORWORK) Italy is to implement an innovative path to effective integration in the Italian labour market and evaluate positive employment and social outcomes. We pilot the proposed action using a large-scale randomization in one region of Northern Italy (Piedmont). The intervention, which will involve about 600 asylum seekers hosted in a representive sample of reception centers, offers skills assessments and gendered mentoring services, combined with language and professional training, to develop an individualized integration plan. The counterfactual evaluation will yield the causal effects of this innovative path to effective integration in the labor market.

The project is implemented by a consortium of 8 partner institutions and 4 associate organizations, which combines a comprehensive institutional multi-level partnership, knowledge of the local context and sound technical skills in the domain of counterfactual impact evaluation.

The FORWORK project is highly relevant in light of the migration crisis experienced by Italy alongside many other European countries in the last years, which has caused one of the largest episodes of forced displacement and some of the most severe refugee-hosting situations in modern history. In 2016, the year in which the FORWORK project was designed and submitted for approval by the European Commission, Frontex reported 181,000 crossings to Italy through the Central Mediterranean route.

Another 182,000 entered Greece through the Eastern Mediterranean route, after the massive inflow of 2015 (885,000). These two countries alone account for well above 90% of arrivals in the recent years and, for most migrants, are ports of entries towards northern European countries. Official figures from EUROSTAT show that Germany has borne the brunt of this demographic upheaval, with 745,000 applications for international protection in 2016. In comparison, only 123,000 applications were filed in Italy.

Arrivals and applications for international protection, 2009-2016 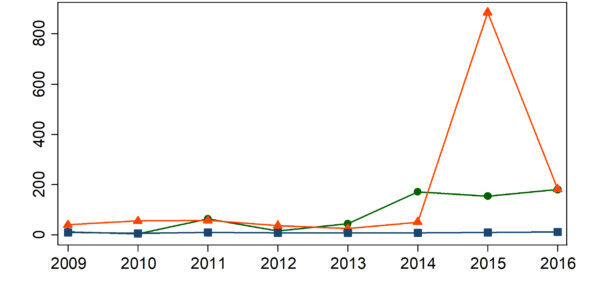 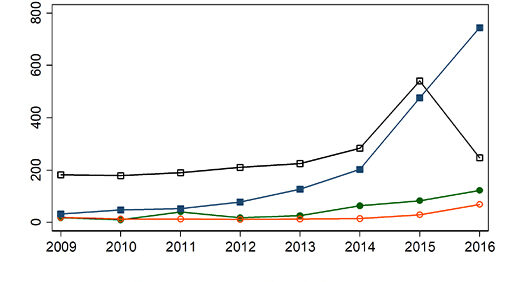 Greece and rest of Southern EU

One of the main drivers of this difference is the perceived opportunity of longer-term socio-economic integration. For example, the hurdle of language differences and the possible lack of qualifications faced by refugees are tackled in Germany by offering language courses combined with work-oriented activities and counselling. This policy stems from the idea that social inclusion parallels improved access to the labour market, consistently with the European Agenda on Migration. Vocational training, traineeships and internships are advocated by the UNHCR among the most powerful tools to ensure participation.

In the most recent years flows of immigrants significantly dropped: according to UNHCR data around 11,400 immigrants arrived in Italy in 2019 and 32,900 in 2020. However, this does not mean that the urgency of the problems relative to the integration in the local social and economic networks has diminished.  As of 2018, there were virtually 190 thousands refugees on the Italian soil, making it of paramount importance to develop strategies to properly foster their integration.